The year 2020 is going down in history for more just than few reasons- with the pandemic hitting the global economy, industries just managing to survive and the loosening of liquidity from central banks dominating the news, one of the key factors being downplayed, and which is now rapidly hitting everyone is “BREXIT”

Until recently, the trade talks between UK & EU had been just background noise overshadowed by the economic fallout and the impact of the coronavirus.

The surprising behaviour of the EU in threatening UK food exports by stating they could delay “listing” approval of UK food exports including those to Northern Ireland, triggered an unprecedented response from the UK.

This makes the likelihood of the UK and European Union reaching a trade agreement by an October deadline quite challenging. This has led to a further downfall in investor confidence which has already shaken markets over the few months ; with the pound suffering its longest negative streak against the Euro since March this year (when Covid-19 started) and bond yields turning negative for the first time amid bets on Bank of England interest-rate cuts.

In addition to Brexit chaos, the UK is suffering one of the biggest contractions in GDP from the pandemic, which may be exacerbated in Q4 when the effect of a surge in unemployment hits the economy at the end of Furlough

Deal or No Deal- What is in Store

GDP Numbers- GDP numbers have plunged, showing the biggest slump for 2 consecutive quarters, causing the economy to fall into recession. With the easing of lockdown measures, some respite is now seen with numbers bouncing back from July, showing signs of improvement.

This improvement may, despite the end of furlough, be sustained by pre-Brexit inventory building, before hitting a sharp drop in GDP levels with the start of 2021 particularly as a no trade deal is in sight.

Also, consumer spending, which makes almost two-thirds of the economy could be key factor in this with Christmas round the corner, and the propensity of UK consumers to use credit, meaning that spending could remain constant if not upward as people spend Christmas holidays at home. How the job market shapes up, with the government’s support package evolving once the furlough scheme ends in October, will be a key factor. Other factors include:

Rising Costs- Even with a free-trade agreement (FTA) in place, the change in UK-EU trade terms will be significant. So, even when the transition period ends, the Brexit impact cannot be unfathomable.

Companies will see their rise in costs once the transition period ends, and this would have a compounding impact to the damage already done by the pandemic.

Stockpiling- Companies building stock to cope with the uncertainty of the outcome of Brexit negotiations.

Tariffs- In the absence of a trade agreement, companies may have to add tariffs averaging 10%, against their exports to EU, however this would be mitigated by tariffs against EU exports to the UK. With the UK importing considerably more from the EU currently the net gain to the UK government could be as high as £9Bn in tariffs.

Port disruption- Even if there is a deal in place, some initial disruption at the ports, rises in transport costs and the slowing down of production.

Company credit ratings- The reporting season for companies between January and March, could result in substantial re-rating of companies reducing access to credit or at the very least increasing the cost of credit, particularly from banks trying to recover losses.

Currency- further fiscal stimulus pushing down the value of the pound.

One of the key factors to note is that, with or without a deal, and despite a potential gain in revenue for government through tariffs, the bureaucratic and cost burden on firms will be substantially higher next year. While the GDP numbers would be closely eyed from early 2021, there will a constant pressure on firms to recover financially from covid-19. A spike in unemployment rates could also persist, and a wide number of sectors could potentially remain under stress for a long while.

For the Bank of England, this could act as push for a further round of stimulus in November. This could involve more quantitative easing, but the jury is still out on negative rates. The policymakers might initially be more inclined to adjust the interest rate on the term-funding scheme to encourage businesses as its first step.

Government stimulus measures in the past such as furlough, loans, and capital injection programmes have brought respite to some segments of the supply chain. However, Rishi Sunak, the Chancellor, has made clear that many of these schemes are now in wind-down and indeed companies are resisting increasing their debt burden.

Impact on the Supply Chain

Trade between UK & EU has been relatively simple all these years- free movement has enabled EU-based supply chains to operate without tariffs, bottlenecks, or delays at the border to consider. The agreement of a trade deal could admittedly ease (but not eliminate) some of these trade frictions. Despite the current standstill in negotiations, a basic Free Trade Agreement is still narrowly the most likely scenario this autumn.

Changes to customs and tariffs, VAT changes on imports/export, shifts in supply chain hubs for pan-European business operations, the impact of longer waits at border control, will not only cause disruption in supply chain patterns but will continue to keep pressure on businesses, and ultimately put pressure on the cash flows. Only those businesses, who have modelled these scenarios, will be able to adapt swiftly to the changes.

Key responses in the entire supply chain would be to identify how one can collaborate with suppliers to adapt to these changes and ensure to have systems and funding in place to support this collaboration at scale. A challenge when corporate and suppliers working capital has been weakened due to covid-19.

How Crossflow Can Assist

Struggling markets are already suffering so called “Brexit Fatigue”, it is essential for businesses to be able to cushion themselves against any outcome. Although everyone is closely eyeing what the outcome would be, disruptions in businesses, processes, and cash flows etc are inevitable.

This landscape increases the need for a flexible solution that can inject working capital into the supply chain without increasing debt, by reducing the order to pay cycle.

Crossflow enables corporates to reduce that order to pay cycle to days, without impacting the corporates debt or balance sheet, whilst providing valuable working capital to suppliers. That working capital means that suppliers can fulfil buyers’ orders, vital to that corporate rebuilding its own revenue’s. Setting up a working capital programme on Crossflow takes a matter of days, with much of the setup work completed by Crossflow.
For more details, feel free to contact me directly at Crossflow.

Magda Rozczka is COO at Crossflow. After completing her postgraduate MBA, Magda led product development within the insurance sector at ING and Zurich. Magda represents Crossflow on the Bank of England decision maker panel, which influences UK interest rates, and has represented Crossflow as part of HM Treasury’s Women in Finance initiative. 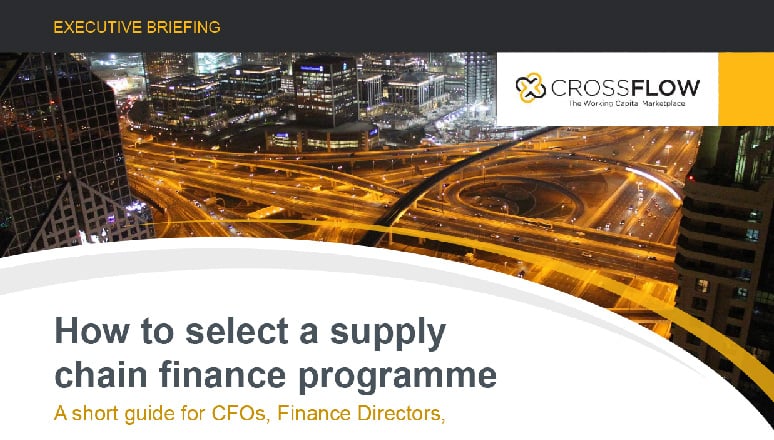 Are you looking to implement a supply chain finance programme?